I was on my way to saying no thanks. In fact I had said “no thanks, I would rather just stay in the house.” I would really be perfectly fine if Roberto went by himself. He looked at me questioningly, hesitated, then picked up the phone and dialed.

“Yes. I’d like to make a reservation to go on your snorkeling trip – at night – the one with the manta rays.” Pause. “Um. How about tomorrow?” Pause  “Good. That’s great.” Pause “4:30? Yes, I know where that is. And do you provide wetsuits and gear and everything?” Pause  “Sounds good. Here’s the credit card number.” He read the card number, expiration date, etc. another pause, and then he said, “Just one – I just need one reservation.”

“Wait” I shouted across the room. “I want to go, too!” I realized that if he went without me and came back so excited about some adventure he’d had, I would feel bad. Worse, I would feel like a wimp. I am a happy, comfortable swimmer and love the ocean. I just don’t want to see what’s down there. It’s all too scary, and the thought of looking down there at night just multiplied the fear factor.

“Just a minute, please,” and Roberto covered the receiver with his hand. “You don’t have to, really. If you don’t want to it’s ok –“

The boat was noisy and smelled of fuel, but I was encouraged by the crew who were young, jolly, and clearly used to handling all kinds of tourists, all shapes, sizes, and attitudes. It was late afternoon when we arrived at the manta ray feeding grounds and took our first dip. I was determined to be a good sport. I pushed off from the boat and peeked into the water. Nothing remarkable. Then in the distance, I saw a manta ray-shaped thing. I was excited, gurgled through the mask to Roberto to look in that direction and he confirmed it. I stayed out a few more minutes and clambered back onto the boat, well satisfied.

The main event, of course, was snorkeling at night, but I felt sure that I had seen enough, and so I munched on my box dinner relatively anxiety free. With the sun dropping into the sea behind us, a cheery crew member told us a bit about the remarkable manta ray and explained the drill. We –  there were about 8 of us – would get in the water and swim a hundred yards to a spot where our snorkeler wrangler would be waiting with a giant hula hoop floating on top of the water. We would grab onto the hula hoop with one hand and point our flashlights downward into the water. This would create a column of light, which would be matched by the scuba divers already on the bottom about 40 feet down, shining their flashlights up toward us. The column of light would attract the plankton and the mantas would come to dine. We were setting their dinner table for them.

I listened to all this with detached interest. When Jack, one of the crew, said it was time to go in, I said I would be staying on the boat. A grandmother and grandson had already made that decision and I thought they looked like good company.

“What do you think is going to happen?”

“One might touch me, hit me with his arm – his wing – whatever.”

“Well, it might flip me up in the air”

“Lucy,” he said gently. “You are not going to die of a heart attack or anything else out there.”

I thought for a few seconds. OK, if I wasn’t going to die….how bad could it be? And if I did die, it would all be Jack’s fault. Anxiety rising, I jumped in the water before I could change my mind. 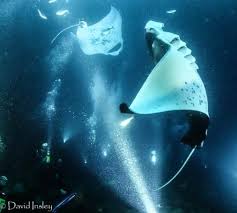 We swam out to the hula hoop and grabbed on. I was next to Roberto, who put his hand over mine reassuringly. I put my head down, let my body float out in back of me and looked down. There were manta rays! They were huge – 14 feet wing spans – they were wheeling and somersaulting under me, sucking up the billions of tiny plankton meals drawn to the light. Their wings were frilly at the edges,  and they glided and swooped from bottom to top in arcs and circles, their mouths like car grills,

huge wide slits. They were so graceful, so beautiful, so grand and so natural, weaving in and out, avoiding each other and us, coming close – two feet sometimes, but never touching us.

I was so overwhelmed, I turned to Roberto whose eyes were bugging out of his mask, and got his attention. I gurgled and spluttered and squealed through my snorkel tube in my excitement, and he nodded violently. I stayed there clinging to the hula hoop for a half hour. I can’t explain the depth of the feeling, but I was moved to tears at times…. my own salty tears inside the mask…the ocean outside. They were so beautiful, like ballerinas, huge ballerinas of nature, ocean dwelling acrobats. I felt so lucky to be there, to see this wonder of the planet. I felt so small. It was inspiring, overwhelming. I swam back to the boat a different person.

I had been on my way to fear and dread, and I had found peace, a deep and awesome peace. 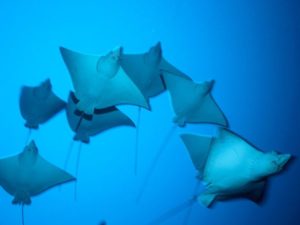