In early March we took a New Mexico road trip. We had to give up a trip to Frankfurt and Rome to visit my sons for obvious reasons, but wanted to take advantage of the big hole carved out in our schedules. It was a wonderful trip, especially in retrospect, because as soon as we got home all hell broke loose.

But back to that innocent time of four weeks ago:  Our first stop was Puerto de Luna, a tiny place on the Pecos River in the east part of the state. This was the home for  Roberto’s relatives before they fled to Albuquerque during another crisis, the Dust Bowl. We wandered the camposanto (cemetery) and found gravestones of those who were surely great great somethings. The names were so evocative, the stones so varied, some slick and polished, some hand hewn, maybe in a hurry, maybe with no alternative. It was eerie and powerful to stand there knowing that below us was the DNA of Roberto’s people, whoever they were. And what would they think of us, standing there decades, a century, later?

Next destination was Inn of the Mountain Gods, a resort on the Mescalero Indian Reservation in south central New Mexico. Out our window was snow-capped Sierra Blanca and a small lake ringed with huge Ponderosa Pines. We stayed an extra night just to soak in the luxury.

I have a confession. While Roberto was napping I found myself in the gift shop of the hotel-casino. A quick tour revealed that there was nothing for me to buy, but I did spy one of those tall twirling racks that hold souvenir key chains with your name on it, if your name is one of several hundred they deem worthy. I immediately saw that “Jane” was on the hook for “Frank” and “Ellen” was on the hook for “Beatrice” and because I have a little touch of some disorder I set to work. The key chains were in complete disarray. Like a person possessed I moved the misplaced ones to the proper hook. Hardly any hooks had only the proper names on them. I might be pleased to see that the Robert hook had a “Robert” on it, but if I looked behind that top “Robert,” there was an “Anne,” a “Vivian” and an “Edward”! So, I would pull off all of them and put each on its correct hook….but every correction revealed more imposters. You can tell by my animation as I write this how exciting it was for me. An hour or more flew by as I hooked and unhooked, twirled the rack, bent down for the “H’s” which were on the bottom row, stretched high for the “J’s” on the top row, then down for Morgan and up again for Walter. The next morning my thighs were screaming. They had not had a workout like that since I quit aerobics. When I told Roberto what I had been doing for an hour and a half he asked what the people who worked there thought and did they say anything. And true to my disorder, I had no idea if anyone saw me or what they thought. 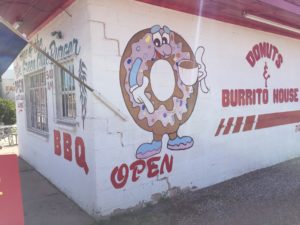 Heading west is Tularosa, home of Yum Yum’s, famous for barbecue, donuts, and probably barbecued donuts. They seemed to offer everything in a place the size of a walk in closet. The breakfast burrito was the best ever and then, of course, for dessert a coconut frosted donut. We were riding high as we pulled into the Three Rivers Petroglyph Area, a BLM national site we had always wanted to see. The day was perfect as we hiked through the boulders, one image more astounding than the next. They date from at least 1,000 years ago, some much more. We call the people Jornada Mogollon, now disappeared, but who were they?  What were they thinking? Did they witness disasters, like pandemics? Or were lightning and drought the biggest threats?

The next night was at the Blackstone Lodge in Truth or Consequences. T or C, as we New Mexicans call it, gave up its original name Hot Springs in exchange for an onsite broadcast in March 1950 of a radio game show called “Truth or Consequences” hosted by Ralph Edwards. You, the husband, might say that you always pick up your socks, but your wife would have told the truth that you don’t, and when you lied, wham, you got a pie in the face. This is probably totally lost on younger readers, and so I include a footnote below on the origin of the name and birth of the annual fiesta to memorialize the moment. Those were very innocent days in a lot of ways. (wikipedia has a nice history of the name change)

Anyway, T or C is now a very small, funky artists’ colony and is still blessed with abundant hot springs. Our room had a waterfall shower in the bathroom.

Turn a big lever and out shot a roaring hot waterfall. There were also hot baths which Roberto really enjoyed. I am not so much into hot soaks, and was disappointed there was not a gift shop attached to the motel, or I would have had my time happily filled with organizing something or other.

And then a turn to the north and on to The Very Large Array, a remarkable display of radio telescope antenna dishes an hour west of Socorro, in the middle of nowhere, for a very good reason. There is minimal radio interference from the hums and beeps of our digital lives. These  27 dishes 80 feet in diameter are aimed skyward, listening for the tiniest sound waves that might be unfathomable miles and years away. The messages they receive have made it possible to map black holes and learn more about the structure of universes. It is really amazing to see them on this vast mountain-ringed plain, straining skyward, always working. We were told to turn off cell phones and any other electronic, digital equipment because of the potential for interfering with  these fragile filaments of light and sound. The day was cold and windy as we held our jackets close and walked among them.

A night in Socorro and we head for home, but not without a significant dip back into the real world. We stopped at the Albuquerque Costco to pick up a few things. The parking lot was beyond full. We found a cart and began our struggle upstream against the flow of carts full of Kleenex, packs of two dozen boxes, as many of those shrink-wrapped blocks as could possibly fit in a cart. I was slow to catch on. Then, aha, this is the next best thing to the treasured toilet paper. I am amused, and a little excited. This is some kind of fascinating phenomenon. I think of the plumbers who will be very busy in a few weeks.

And now, sequestered at home we have our memories and our pictures of our last great adventure. And what a span of civilization it was! From the petroglyph artists of 1,000 years ago to the astrophysicists of the Very Large Array, with stops in between to visit roots in Puerto de Luna, eat the world’s best breakfast burrito, have a hot soak, and even get a little work done at the gift shop.

And what of the virus? Before the petroglyphs there were viruses, and after the giant satellite dishes there will be viruses. The blue sky, white clouds, cold winds, rain, snow, sun and probably a good number of creatures will prevail, as they have for millennia, before we ever made an appearance.

24 thoughts on “A Road Trip in the Nick of Time”