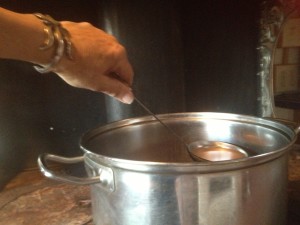 He was a well-dressed utility company executive in his early forties and he was walking in my direction. I had hoped for a little peace and quiet during my lunch break in the cafeteria, before the negotiation resumed and I would have to take up my mediator role again. But he was heading toward me, and he looked concerned.

“Lucy? May I have a word with you, just briefly?” he asked.

“Sure, have a seat,” and I motioned to the chair across from me.

He landed abruptly, and blurted out, “I need some advice about dealing with Indians. I know you’ve worked with Navajos a lot, and we had a kind of difficult experience last month.”

Now he had my attention. “Tell me about it. I’m happy to listen, and maybe I’ll have some ideas.”

The utility company wanted a right-of-way from the Navajo Nation for a transmission line, and the first step, they were told, was to make a presentation at the local community level. This meant getting on the agenda for the monthly meeting at the chapter house (seat of local government) in a particularly remote area of the Nation. My confidant told me that he and his utility company comrades had wondered how to dress, and had decided that suits and ties would show respect. I could picture them, arriving at the chapter house, the picture of power. They were wearing their power suits, their PowerPoint presentations were ready, and they were offering powerful handshakes all around to any Navajos they saw.

But he confessed to feeling uncomfortable. Perhaps they were over-dressed, he mused, and everyone with whom he shook hands offered him a dead-fish style handshake in return. The presentations seemed to go well, although the interpretation certainly did take a long time, he remembered. And there were moments when the audience laughed during the interpretation, even though he couldn’t remember that he had said anything funny. Sometimes he would speak a long time, and the interpretation would be only a couple of sentences. It was unsettling. I reassured him that he had done everything just right. The limp handshake was traditional, nothing to be offended by. As for the interpretation, well, it was very challenging to try to translate certain modern concepts and technical terms, and it could take a long time. And, yes, Navajos did like to laugh, and perhaps the interpreter used a comical word here and there.

But what the utility executive really wanted to ask about was the meal. Was it normal, he said, for them to serve guests a kind of watery and slimy stew with pieces of sheep intestine in it? They ate it, he quickly added, knowing how rude it would be to refuse a meal served, but, and here he wrinkled his nose at the memory, it certainly was slimy.

Ah, yes, I said, it was a very special meal indeed, only served to special guests, and they had been right to eat it, even if it was awfully slimy. I didn’t add that they had been served a Navajo power lunch, the final touch on a strategy designed to put the powerful adversary off balance. And very effective it was.

I love that story and the images it conjures up. It is a perfect illustration of the power that the powerless can exert.  Just as a lawyer might use legal jargon to intimidate the opposition, or a developer might imply that vast amounts of money were backing him, so a minority group can use language, religion, even food to gain the upper hand.  At the chapter house that afternoon, the Navajos used culture in a cunning way to gain the upper hand in a situation where they would otherwise have been outdone by the utility company visitors. And, yes, the underdog succeeded. The right-of-way was negotiated to go around this chapter’s land entirely, just as the members had wanted.

I’d be interested in hearing your thoughts or experiences with the powerless exerting power.

21 thoughts on “A Slimy Kind of Strategy”