[For those of you not in the Southwest, the term Anglo usually means anyone not Indian, more or less synonymous with White.]

It’s embarrassing, but one of the hardest things about being Anglo for me has been admitting it. After years living in Navajo country and more years working with Pueblos and tribes, I sometimes drift into some kind of fantasy that I am not really Anglo, that I am almost an Indian, that I am more non-White than White. Of course this is not true, and I try as quickly as possible to bring myself back to reality before I do anything that might embarrass myself and others. One memory that helps bring me back comes from Acoma Pueblo several years ago.

I had a free day and decided to indulge myself and go to the traditional dances at Acoma Pueblo. I jumped in the car, zipped through Albuquerque, turned west toward Acoma, then south to the pueblo’s mesa top. I spotted it in the distance, rising hundreds of feet off the valley floor, so beautiful, so powerful. I felt very lucky to be on my way to a special ceremony in a community that would welcome me and all others who came with respect.

I arrived early, parked in the lot at the bottom of the mesa and walked up the dust and sandstone path to the top. The adobe houses, the white church, the ancient cemetery, the smells of cooking, all was very comforting. I felt oddly at home. I was ready for a spiritual experience, a reprieve from the demands of my life in Santa Fe.

It was 10:30 and the first dance would probably be starting soon. I walked behind the houses that ringed the dirt plaza, peeking between them to find the perfect viewing spot. I assessed  the level of the sun and its direction, the location of the kiva, and other vague criteria. I found an area between two blocks of adobe houses where I would have a good view. There were a couple of dozen folding lawn chairs set up in four rows in front. I picked a spot next to one of the buildings and behind the rows of chairs. The chairs, I thought with anticipation, will be filled with elders and children, and I will be able to see what is going on in the plaza over their heads.

I leaned against the wall and looked out beyond the plaza and above the roofs on the other side to the sky. It was spectacular. The clouds were puffs, huge ridiculous, snowy white puffs, bigger than they should be, so big I wondered how they could hold themselves together. Surely they were drawn by a preschooler and pasted up above the pueblo for this special day. And the color of the sky, also straight from a preschool box of crayons, was simple, gorgeous, clear blue. A perfect day for dances at Acoma, dances which promise to be a delight to the eye and ear, and an inspiration for the soul.

My reverie was broken by the sound of chatter, chattering women coming across the plaza in my direction. They were not the elderly Acoma ladies I had pictured sitting in front of me; nor were they a younger generation preparing with excitement for the feast to come. They were from a tribe to the east, from Texas. They were tourists — from Dallas, I surmised  — and they had targeted those empty folding chairs as prime seats. “How lucky we are to get here early,” I heard one say, “so that we could get good seats.” As they got closer I saw that the glint coming off their breasts was the sun striking their large, extra large, silver and turquoise squash blossom necklaces. They each had on a hefty concho belt as well. They were decked out and they were ready to see the dances. They settled themselves in four front row seats, and continued to talk, unaware of me behind them, leaning against the wall in the shade and blushing violently.

I stared at the backs of their heads and thought critical thoughts. “How could they be so insensitive? Don’t they realize that these chairs are not for them?  Don’t they know that they should be unobtrusive like me?” Pueblo members were beginning to gather and I could hear the drums from the kiva. The dance would start soon. I was certainly glad that I had nothing to do with those women from Dallas. I made sure to stand as far from them as I could so that no one mistook me for part of their clan. I assured myself that I was a different kind of Anglo, one who had lived and worked with Native people — and here I began to slip back into that fantasy — one who was really more Indian than Anglo… underneath it all.

The folding chairs were filling up with Acomas, and I was getting more and more agitated about the tourists in those chairs designated for Acoma elders and children. I was torn. On the one hand I wished that the Dallas women would snap to and move themselves to some secondary position where they belonged. On the other hand, I reveled in the fact that they remained ignorant, because that made them all the more distinct from me. There could be no confusing us, them and me. They were insensitive and I was enlightened and aware. I was dying for them to get up and move, to see the light, and at the same time I was relishing the fact that they were the Anglos and that I was not.

The drums were louder now, and from the posture and movement of those around me I could tell that the dancers would soon appear between the break in the houses across the plaza.  Perhaps it was the beat of those drums, the anticipation, those oversized clouds, a pang of guilt —  whatever it was, I had a revelation. My pettiness and judgementalism, my competition with these women for who was the most deserving outsider to be present at this very special cultural event, all these unpleasant and unworthy emotions subsided.  I saw these Dallas ladies in a new light. I realized they were doing the best they could. They had no knowledge about where they were, but they had taken the trouble to get themselves up to the mesa top in time, on this special day, and they cared enough to sit in the heat of the late August sun and wait for the dance. They saw chairs and made an assumption. This was all foreign to them.

At the last possible moment my conscience kicked in. After all, I knew so much more than they did. I was Anglo, and I was kidding myself to think any differently. And these tourists were Anglo, and by God, we needed to help each other out. Much to my surprise, I was flooded with affinity for them. They were my sisters! Moving in their direction, I squeezed between chairs until I was standing behind them.

“Excuse me,” I whispered,” leaning over and smiling at them. “I just wanted to let you know that these chairs are always reserved for the older Acoma people and the children, so that they can have a good view of the dances. Probably you didn’t know….” Before I could finish, there was a muffled shriek in unison from the foursome, and they began to rustle in their seats, gathering purses, parasols, and water bottles. “Oh my, no! I didn’t know that! “Well, thank goodness you told us!” “How embarrassing!” “We would never want to do anything wrong!” They vacated the chairs in such a hurry that one collapsed. The last Dallas-ite turned quickly to right it, and smiled at the elder who had been sitting beside her. “I was just resting, you know. Sorry about that.” The grandma smiled back. 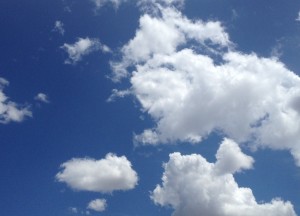 My Anglo sisters followed me to where I was standing at the side of the building behind the chairs. With many thanks and apologies they settled in to enjoy the dance. The clouds were even puffier and more outrageous than before. The first set of dancers rounded the corner of the opposite building and appeared in the plaza. We five Anglo ladies gasped with quiet appreciation.