If you live in New Mexico, you have probably gone to at least one feast day at a nearby Pueblo. And if you have gone to one, you have probably gone to many more. They are wonderful events where the Pueblo and its people are blessed for the coming year, with traditional dancing, singing, and drumming. They are open to the public and although the sights and sounds are deeply satisfying, your Pueblo hosts will not let you leave with an empty stomach. They welcome strangers into their homes and seat them at a table heavy with bowls of red and green chile stew, beans, posole, potato salad, baskets of bread, plates of cakes, brownies…I can’t go on! My mouth is watering as I write. See my previous post for more on Pueblo dances  http://lucymoore.com/always-was-and-always-will-be/

It is a re 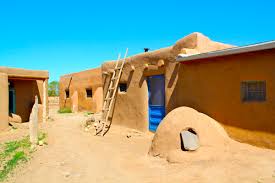 ally awesome thing, to be welcomed into a home and fed. There is a bond between you and your host(ess) and the others eating with you that is like none other. As a facilitator I have come to appreciate the role of food in resolving conflict. Sharing a meal, or even a snack, offers a chance to relax, be nourished, and build a relationship with that person who might look like an adversary on the other side of the negotiating table. It is also a leveler. Lawyers, scientists, community members, tribal leaders, elected officials, cooks and janitors are all equal at mealtime.

And so it is a major frustration for me that federal agencies with whom I often work are not allowed by law to buy food for anyone outside the agency. This has led to such absurd situations as federally sponsored community meetings held from 5:00 to 8:00 pm on a weeknight, where the attendees might have to drive an hour or more and then arrive to find not so much as a cookie and bottle of water waiting for them. This drives me crazy. If I am facilitating, I bring plentiful snacks myself – fruit, vegetables, crackers, cheese, trail mix, juice, coffee, and yes, cookies, lots of cookies. I am not about to try to facilitate an angry crowd that is also a hungry crowd.

Over the years I have worked with the Forest Service as they revise their forest plans. Here in Region 3 (New Mexico and Arizona) there have been dozens of community meetings, public forums, tribal summits on all kinds of topics. I have consulted on some projects and facilitated others, bringing snacks when needed. Forest staff and I have talked at length about building strong partnerships with other jurisdictions – local government, private landowners, other federal agencies and tribes – in order to maximize the impact of land improvements on Forest Service land. I have emphasized the importance of honesty, clarity, and a personal relationship based on mutual caring. They have been willing students, and have implemented the ideas as best they can, within the limits of the law.

Recently, Region 3 Forest Service staff invited me to a tribal summit in Albuquerque to offer my observations on their relationship with tribes.  Over thirty tribes were represented by about fifty leaders and staff. They sat politely and listened to a series of Forest Service presentations on a wide variety of subjects – wildfires, endangered species, forest thinning, pest management, recreation, and more. There was a question or two after each presentation. The atmosphere was a little formal, a bit restrained. Everyone is going through motions, I thought.

And then the Forest Service chief announced it was time for lunch. Tribal members gathered their things and prepared to leave the building, get in cars and drive to Wendy’s or McDonald’s or wherever. They knew from experience that the feds don’t feed people, by law. A fact of life. The reality of working with the federal government.

But when they turned around, what did they see? A line of Forest Service employees coming into the room with dishes, platters, bowls and baskets, heaped with food they had made themselves. There was a huge pan of enchiladas and one of lasagna, a bowl of red chile and one of spaghetti. A man had made spanakopita and stuffed grape leaves in honor of his homeland. A woman had fried chicken as her grandmother had taught her. Another brought a vegetable tofu stir fry, and

another a turkey meatloaf. There were endless salads and desserts, all brought by Forest Service staff in a gesture of hospitality to tribal neighbors. They were saying, with this abundance of food, thank you for the hospitality you show us every year. But more importantly, they were saying we understand that a solid, trusting relationship includes sharing food, and not even our employer, the federal government, can stop us from making that happen.

The look of surprise on the tribal faces said it all. Jaws dropped.  They set down their briefcases and their jackets, and headed to the long tables in the back of the room, now heavy with lunch. The mood was light, the room filled with chatter, as people exchanged stories, often finding unexpected common ground. And when the paper plates and

plastic ware were deposited in the trash cans, and the leftovers covered in aluminum foil and the Tupperware snapped back in place, everyone made their way back to the front of the room. The presentations continued, but I swear there was a palpable shift from the morning. There was an openness, a relaxation, a feeling of camaraderie between the podium and the audience. All that good food and the spirit with which it was offered had made the difference.