A few months ago my husband and I we

re watching TV and a mouse ran out from under the console, across the carpet and disappeared behind a bookshelf. Mice are a chronic problem, but this brazenness was too much. We suddenly felt the balance of power shifting; we were in danger of losing control in our own house.

“Animal shelter. Tomorrow,” we said in unison. We had been talking about getting a couple of cats, good mousers, for awhile. Our previous pair of shelter cats, Fluffy and Party Boy, were unrelated and never got along. It pained us that they shunned each other, and that when the aging Party Boy disappeared into the arroyo and never returned, Fluffy showed not one trace of sadness, but acted vindicated, as if the house was finally all hers.

Now catless for several years, we had strong opinions about what we wanted: two female sisters. They would love each other. And they would not display some of the undesirable male traits like spraying the sofa and the geraniums. Yes. We had our bottom line. We would take any cats — any age, any color, any length of hair, any number of toes, tail or no tail — as long as they were sisters.

The next day, facing a room full of cats and kittens on display at the local shelter, we were overwhelmed. The instinct to take them all is so strong, and the reality so impossible. We asked if there were sisters in the crowd. No, but there were several females. We focused on those but the perfect pair did not emerge. I went into the lobby, leaving the decision to my husband since he was more likely to come away with two rather than ten. He took some time and then emerged with a gray tabby and solid black one. The tabby was bigger about four months; the black one younger about two months. They weren’t the same age, not the same litter, and…they were boys. My husband had spotted the two, curled up together in a corner, sound asleep. That, he decided, was the most important criteria, trumping the fact that they were males.  And so we left the shelter with two male cats having arrived with only one criteria – two females.

Jesse James and Benny Hana have been with us several months and we couldn’t imagine having any other cats. They are perfect.  So much for bottom lines.

If this were a negotiation exercise, I would point out that wanting two females was our position, but that wanting two cats that loved each other was our underlying interest. It seems obvious. But how strange it is to find yourself giving up in the space of a minute your deeply held position, and making a 180. It is a funny story, and we love to tell it and laugh at ourselves. But I find myself thinking about what it means to make that kind of admission, to give up what you have publicly stated is your bottom line. Even if the result is that your interest is satisfied, which is what you should care most about, how hard it is to make that kind of reversal.

As an environmental mediator for over 25 years I am always amazed at the courage of some people to give up those positions that are central to their being.

An environmentalist risks alienation from her own kind when she reaches out to the ranching community, the traditional enemy. Her real interest is in restoring the stream bank and she knows that there is a better chance of getting that done with the help of the rancher whose cattle are the culprits. But there those in her environmentalist camp who consider her a traitor. Or, a rancher is reviled by his neighbors for suggesting that an alliance with the suspect environmentalist might help preserve a way of life. He knows that if he can work with those whose bottom line is the same as his — preserve land in as healthy a condition as possible — he may have a chance of surviving. By dropping positions – “We will never work with, or even talk to, the enemy” – these two are likely isolating themselves from their supporters, their funding, their neighbors, their colleagues.

And I am not talking theoretically. In New Mexico we have two stellar examples of this kind of collaboration. The Quivira Coalition began with a handful of brave environmentalists and ranchers reaching out across the traditional divide to restore rangeland and stream banks. Many years later the organization is thriving, drawing members from all over the west. They have restored over 1 million acres and many miles of stream banks, and hold an annual conference that is always inspiring and challenging.

The Malpai Borderlands Group was the inspiration of neighbors in the ranching country of the boot heel of New Mexico. In the mid-1990s they feared their days were numbered as they saw increasing pressure from the environmental movement to eliminate grazing on public lands. Setting aside their fear (and even loathing ) of those tree hugging types, they, too, screwed up their courage and arranged a meeting with the enemy to see if together they could improve rangeland,  while protecting endangered species. Many thought it was a crazy, if not traitorous, idea, but it worked. Today the group is a powerful example of cooperative land management and good stewardship.

I know there are those on both the ranching and the environmental sides who deeply resent these collaborative efforts. They feel that their respective leaders have consorted with the enemy, given in on important points, and settled for too little. But for me, these renegades are heroic, and they have my admiration and gratitude.

And just because cats are so cute, here is another shot of Jesse and Benny. 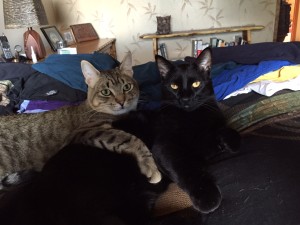 17 thoughts on “The Bottom Line”