Remember the occupation earlier this year of the Malheur Wildlife Refuge building in Oregon by the Bundy brothers and friends? They had come to the rescue (in their opinion) of locals who had been convicted of burning forest land and were protesting. They saw these rural Oregonians as fellow victims of the federal lands policies — policies that deny them free use of public lands. They were not welcomed by most locals who preferred to handle the situation in their own way and resented outside interference. 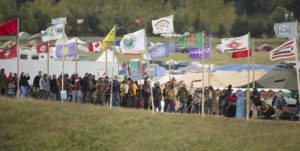 Not long after Malheur, the protest against the Dakota Access Pipeline project began at Standing Rock in North Dakota. Thousands of sympathizers, Indian and non-Indian, flocked to the encampment to ally with the Sioux. The Standing Rock Chairman expressed thanks to all who are raising their voices with the Sioux against the actions of the pipeline company and what they see as the complicity of the Army Corps of Engineers, responsible for permitting the route under the Missouri River just upstream of the tribe.

But not all are happy about the out-of-state supporters. Local non-Indian residents in the area claim vandalism of private property, blockaded roads and harassment. Some are frightened by  the presence of thousands of Indians in the neighborhood.

So, is this the same scenario – Malheur and North Dakota? In both cases outsiders flocked to support a local cause. But I would argue that the stakes are different, that this is an issue of tribal sovereignty, not an individual citizen complaint against the feds.  This is about US history, treaties, court cases, and policies that define the unique government-to-government relationship between tribes and the federal government. A tribe’s sovereign status has been affirmed in various venues, and the federal government has a commitment to respect that status and deal with Indian Nations as they would any other sovereign power – to the extent possible. The extent possible is defined case-by-case, depending on the agency and the tribe, but in the end it seems that the US usually prevails. If a pipeline needs to be built, a sacred mountain mined, a river diverted the tribe is likely to lose. 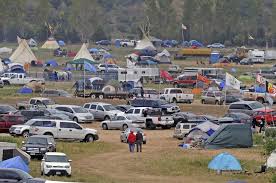 Standing Rock is calling for scrutiny of this relationship and a recognition of abuses in the past as well as the present. This is an objective shared by every federally recognized tribe across the country. The encampment at Standing Rock has galvanized tribal voices into a powerful protest. Many feel they are reclaiming a cultural identity and finding a new unity among tribal people which they hope to maintain and nurture.

Although the Army Corps lived up to its legal obligation and met with tribes to hear their concerns, the tribes did not prevail. “Hearing concerns” is a great first step, but sovereign to sovereign negotiations need to follow, where mutual respect and careful listening are the rule, and where both sides honestly seek a solution. This is why Standing Rock has stood up and why others around the country have rallied around. This is not simply about a citizen at war with the federal government; this is about the definition of sovereignty and our responsibility as a nation to honor our commitments.

Oh, and back to the Bundy gang. After their five week siege, they were charged with obstructing justice, firearms violations, destruction of federal property and theft. In October a federal judge acquitted the Bundy brothers and five others of all federal charges.

And in North Dakota, last I heard authorities shot water hoses at the protesters in freezing temperatures and attacked them with a variety of clubs, sticks and rubber bullets. There’s another difference between the two situations.

10 thoughts on “Troubled Waters: A Tale of Two Protests”