[We took our grandsons to see Inside Out, the recent Pixar movie. It was entertaining with a good message about the value of our different selves. I was reminded of a device I invented years ago to help explain myself to myself — described below. I call it the Bus Lecture.] 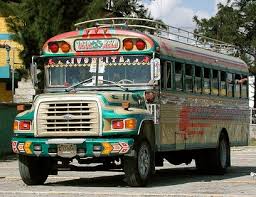 I’ll let you in on a little secret. Maybe it will help you sometime. This is the way it works. Imagine you are a bus – not on a bus, but you are the bus. You can be whatever kind of bus you want. You might choose an ancient Blue Bird school bus, now part of the Guatemalan bus system, chugging up hills, puffing blue smoke, grinding gears, festooned inside with silken fringes, Virgin Marys, Mickey Mouses, and lots of ignored signs about not standing in the aisles or talking to the driver. Or, you may be a Greyhound Scenicruiser, with big high stairs, air conditioning, a lavatory in the back, and seats that recline with that material like a very, very short crew cut. Or, you may be a private coach, like Willie Nelson has, a huge van equipped with everything, including beds. Or maybe it’s a good, solid bus from the Transit System, reliable, clean, swift, efficient, with plenty of ads to read on the ceiling above the seats, and environmentally responsible, running on natural gas or even electricity. My only advice is that you choose a roomy bus. A mini van will not do. Trust me.

You will need a bus with a lot of room because that bus has got to hold all of you, every one of the you’s that are inside of you. Here’s my theory. Whoever we have ever been in this life, we still are. It’s just that most of them don’t show up during an ordinary day. At any given time, certain ones of ourselves dominate. At work, I am a professional, and she is generally a pretty competent, successful person. She earns money. She takes herself pretty seriously. On vacation, another me may emerge for awhile, one who likes to be fed, who likes to sleep, to forget responsibility, to laugh with her friends. When I ski, there’s a wilder me, more reckless, careening through the trees, and so on. The point is that there are many me’s and many you’s. 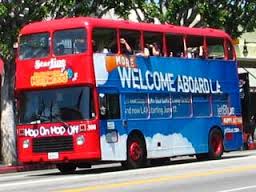 Now it gets a little more complex. Sometimes you may notice a totally unexpected behavior or reaction in yourself. You’re suddenly wounded, like a four year old who has been told her painting should look like a tree, when she thought it did. Where did that come from? Who is that? Well, it’s very simple. It is a wounded four year old. She’s there, on the bus, too. And so is a two year old, exhausted and needing a nap, and so is a fourteen year old obsessed with an incoming phone call that never comes, and so is an eighteen year old driving much too fast, down those rain slicked hills, in the notoriously dangerous Corvair, with a few beers inside her besides. And it goes on and on. You know them, your cast of characters — I know mine — and I can assure you that they are all there, from all periods and roles in your life. You might think, “Well, that was then, and this is now, and I’m certainly glad I’m not like that anymore.” Well, think again. Where do you think she went — that one that you’re glad you are not anymore? I’ve got news for you. She’s on the bus!

Yes, all these people — probably at least a dozen — are passengers on the bus. But a critical question is who is driving the bus. The driver should be licensed, sensible and sober. Hopefully, there will be two or three among yourselves capable of handling a bus maturely. But, if the other passengers become discontent, restless, irritated, or worse, rebellious, you can have real trouble on your hands.

Let’s say you’re at work, managing a difficult situation, and suddenly you lose your temper, and insult your boss. That is a major clue that someone on the bus is not happy. The fourteen year old perhaps was feeling particularly ugly and pimply that day, and she bolted down the aisle and grabbed the wheel from the unsuspecting driver, the competent workplace you. If you’re cruising along the Interstate at 75 or so, this can be a real problem. Bus swerves, driver loses momentary control, and temper as well, shouts at fourteen year old to sit down and read her teen magazine; the two year old’s ice cream falls out of the cone onto the seat; the baby who was napping in the back wakes up, is frightened, and starts to cry; the mother jumps out of her seat, runs to comfort the baby; the four year old is jealous, and trips the mother, and so it goes. You’ve got bus chaos, and that bus has blasted right through into your difficult situation at work. You insult your boss, you don’t know why. You should apologize, but you’re suddenly feeling ugly, frightened, jealous, worried, and a lot of other inexplicable feelings from the bus.

Now, of course, there will be incidents on the bus all the time. There are a lot of needs to be met. To differing degrees, and at different times, the passengers need excitement, security, freedom, boundaries, entertainment, rest, laughs, cries, love, the list is endless. The trick is to keep them all content enough so they won’t cause danger to the bus as a whole, which of course is really you. You must stop for rests and outings. You must keep the temperature comfortable, let them open the windows, but not hang out of them — and give them plenty of ice cream. They all like ice cream. Well, perhaps there’s a righteous dieter in there who will abstain, but anyway the point is to keep them happy. Keep your eye on that rear view mirror and they will be a good bunch of travelers to have along with you. They will let the driver drive. They will keep things lively. You will never be bored.

One more thing, and then I promise to let you load up your bus and be off. No one can be kicked off the bus. You will be tempted, I can tell you from experience, but it can’t be done, and shouldn’t be tried. I don’t care how bad, ugly, evil, mean, selfish, boring, fat, lazy or profane she may be. I don’t care if she sings “Rubber Ducky” nonstop for days at a time. She is one of you. She’s a passenger and she’s there to stay. So, give her some special attention. Stop the bus occasionally, pick a nice rest stop, and spend some time with her. She’ll be okay. She’s just a little needier than the rest.

I hope that you will find the bus a useful concept as you drive through life. All aboard and don’t forget those rest stops.

There are hazards outside the bus over which you have no control. That is called life. The driver may have some influence on what happens inside the bus, or she may not, but in any case, she certainly has no power over acts of God and Nature, or the behavior of other drivers and their buses.