My husband and I had gone to the state capitol on a non-partisan mission to see our good friend Levi Romero be inducted as New Mexico’s first Poet Laureate. Levi was honored by the senate and read a wonderful poem about growing up in northern New Mexico, the sights, sounds and smells of those days. 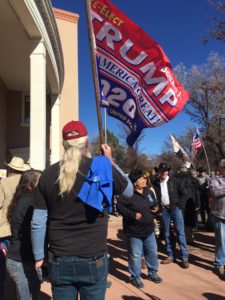 Afterwards, when we reached the front door of the capitol building we saw through the glass door a crowd of 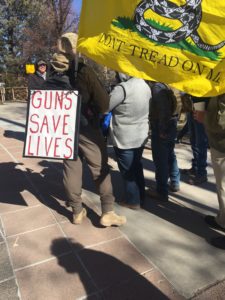 protesters, flags, waved and worn, signs, banners and guns, lots of guns. The legislature was hearing a bill on the “red flag” law which would limit the ability of those likely to hurt themselves or others to have access to a gun. There had been a rally of over 500 demonstrating their passion for the second amendment and their right to own guns, and although the speeches were over, there were probably 100 or so still milling around.

“Let’s go out the other door,” I urged, clutching Roberto’s arm.

“No, I want to talk to them. This is our chance,” and he moved through the door. I followed, not wanting to leave him alone, and a bit fearful that the effort at conversation might not go well.

We mingled, reading signs, looking at outfits. I was on edge, feeling like a spy, afraid to be found out. We saw a large American flag with the Roman numeral III on it. I asked Roberto what it meant.

“I’m going to find out,” and he strode toward the young man holding the flag on a long pole. Again I followed nervously.

The young man explained that the III signified the percentage of people who fought on the American side in the revolutionary war, 3%. [Online research suggests to 15-25%.] “All it takes is 3%,” he said cheerfully, “and we’ve got that already.” He was a former Marine, like Roberto, and they compared notes. He had been in Kosovo, Iraq and Afghanistan, and had a big shotgun slung over his shoulder, with the chamber open and empty. He went on to talk about the Blues and the Reds, and how he didn’t want a war, but the blues were pushing it. Roberto said he was blue, “very Blue,” and he didn’t own a gun and didn’t want to shoot anybody and he hoped that the young man didn’t want to shoot him.

“No, no, I don’t want to shoot anyone, really,” and I believed him. He spoke of encountering “Blues” who “attacked” him. I said I could imagine that he heard some ugly things, and he said he had been physically attacked. He was afraid of what they might do. I was struck by what we shared, he and I. We both feared “the other,” and here we were face to face with “the other.” I talked about the “red flag” law, that I thought it was a good thing. He didn’t say anything, but he listened.

There was something appealing about him. He had moved his family out of the city into the country, and was

raising goats. He was polite and calm, a nice guy. I asked if I could take a picture with him and he said, “of course,” putting his arm around me, as Roberto got on his other side. We chatted some more and as we left he asked if he could give me a hug….and we did, although hugging a man with such a large gun is a challenge.

I know there are a million things to say about this encounter: I was naïve, he was not typical, they are not to be trusted, we didn’t touch on volatile subjects like the presidency, but I don’t care. It was important. It was a connection. It was a good thing. I was also struck by the atmosphere as we walked through the dwindling crowd – a lot of smiles and hugs, a lot of jokes and laughter. It was familiar. If it weren’t for the guns, the signs, and the outfits, I would have thought I was at a Pro Choice rally or a Women’s March. I know, that’s a big “if.” 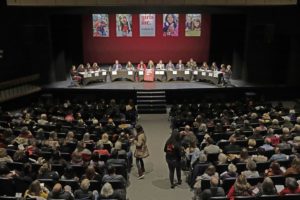 A few nights ago we went to the best political forum I have ever attended, and that’s saying 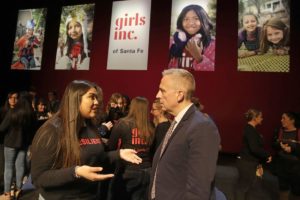 something. Eight Democratic candidates running for the 3rd congressional district in New Mexico sat on stage. They were flanked by four teenage girls, 13-17 years old, at each end. This was a forum organized, hosted and moderated by Girls, Inc. of Santa Fe, a non-profit dedicated to giving girls the tools and support they need to succeed in these challenging times.

The girls wore black t-shirts with just a single word in red: “bold,” “smart,” “strong,” or “resilient.” They were everywhere, welcoming the public, taking tickets, giving out programs, seating the candidates, and dealing with the unexpected, in this case, a candidate who had not registered and showed up unexpectedly. As a facilitator, I appreciated their calm, their professionalism and their good cheer. Each young woman on stage introduced a candidate and asked a question, crafted by the girls themselves. The topics were ones they cared about: plastics in the environment, sex education in schools, bullying and LGBTQ rights, gun control, the economy, preservation of a rural way of life, and more. 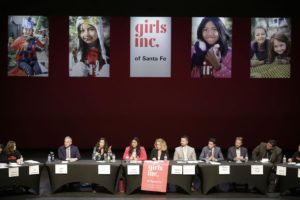 And they added a dose of wit. The first question was “What super power would you like to have?” The last was “What advice would you give to your teenage self?” They kept the speakers on track and on time. They insured the audience was respectful and attentive. It was what every debate should be.

As I was musing on this amazing evening I realized that the success was due to more than the organizing and moderating skills of the girls. It was their very presence, their power as witnesses of adult behavior and interaction. The candidates were remarkably congenial with each other, particularly obedient of the rules, effusive in their gratitude to Girls Inc. They were on their best behavior, and the result was an extremely informative and enjoyable evening.

So, here is my request: Girls Inc, please convene us, the Blues and the Reds, put on your power-shirts, and guide us through an evening of learning and listening. You can do it, I know you can. And I’ll be there.

23 thoughts on “The Solution? Girl Power”